or make 4 interest-free payments of $10.25 AUD fortnightly with 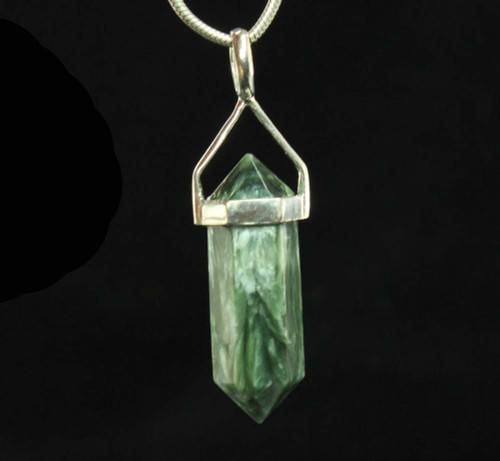 Seraphinite Double Terminated Pendant in sterling silver. The image is an example, all pendants are the same quality, but there will be a slight variance. 35mm x 10mm.

Seraphinite is a powerful healing stone which is becoming increasingly popular. It is a form of the green mineral Chlorite, which often appears as inclusions in Quartz and other stones. Sometimes this mineral grows into a massive gem form which is commonly known as Seraphinite. It is an excellent healing stone which boosts the energy of both the healer and the patient. Some people even say that it causes regeneration and miraculous healings. What is certain is that the stone helps us to work holistically on our illnesses, not jus healing the physical body but also strengthening our astral and energetic bodies, dissolving blockages that prevent us from being fully healthy and drawing out emotional problems and old traumas that may be causing us distress.  It is believed to be "PREMIER HEALING STONE OF THIS AGE". It strengthens and activates all chakras. It also is believed to cause old patterns of disease or imbalance to far away, which creates a space for new patterns of well-being to form.